In third grade, we teach about the continent of Asia. I applied for and was awarded the Eleanor Venture travel grant to go to Southeast Asia over my winter break – almost 4 weeks starting in 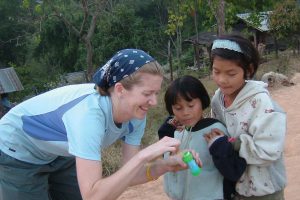 In Thailand, I explored the crowded city of Bangkok and its floating markets, temples, and historical, religious, and political sites. From there, I headed north to Chaing Mai in the mountainous region and spent three days backpacking on a trek to visit a hill tribe. During that trek I rode an elephant, went white water rafting on a shaky raft made of bamboo, slept under bamboo shelters, ate local food cooked over a fire, and sang the “Hokey Pokey” for the local children around the campfire.

In Vietnam, I visited Hanoi – rich in history – and spent three days on a boat in Ha Long Bay – a gorgeous vista of over three thousand limestone rock formations that rise out of the ocean. Local people live on boats and make their living from the ocean. From there, I spent 24 hours on a train to make my way south, eventually arriving in Saigon (or Ho Chi Minh City). I was there for Christmas and it was fascinating to see how this mostly non-Christian country celebrated my holiday! I spent a lot of time touring the Vietnam War museum, tunnels dug by the Vietnamese where they hid during the war, and other sites in the Mekong Bay area. 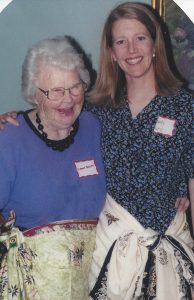 From there I took a bus across the border to Cambodia. The border crossing was an interesting and frustrating example of what communism is like. Many hot hours later, the bus continued to the
capitol, Phnom Penh. I met with several people who had lost many family members to the Khmer Rouge and I visited the museum and a killing field. In addition to the war museum in Saigon, that was one of the more sobering moments of my trip. Onward to Angkor Wat where I spent several days exploring the temple ruins of this breathtaking area. After celebrating a low-key New Year’s there (it wasn’t a new year on the Cambodian calendar!), I made my way back to Bangkok for the return trip home.

While in Cambodia, the devastating Tsunami struck. I was never near the coastal area that was demolished, but many friends and family members were certainly worried about me. It was very interesting to follow the news from my $10 per night hotels – many of which had CNN on the TV!

Here at school, I have brought new energy, stories, and materials to the subject of Asia. In each country I collected school posters and children’s books in the local languages. I also purchased traditional and modern popular music in each country, puppets and toys, etc. to show what the children play with in Asia. The students probably learn the most from seeing my slides, hearing my stories, and being able to ask me questions. By the time we complete our study of Asia, they feel connected to the three countries I visited.