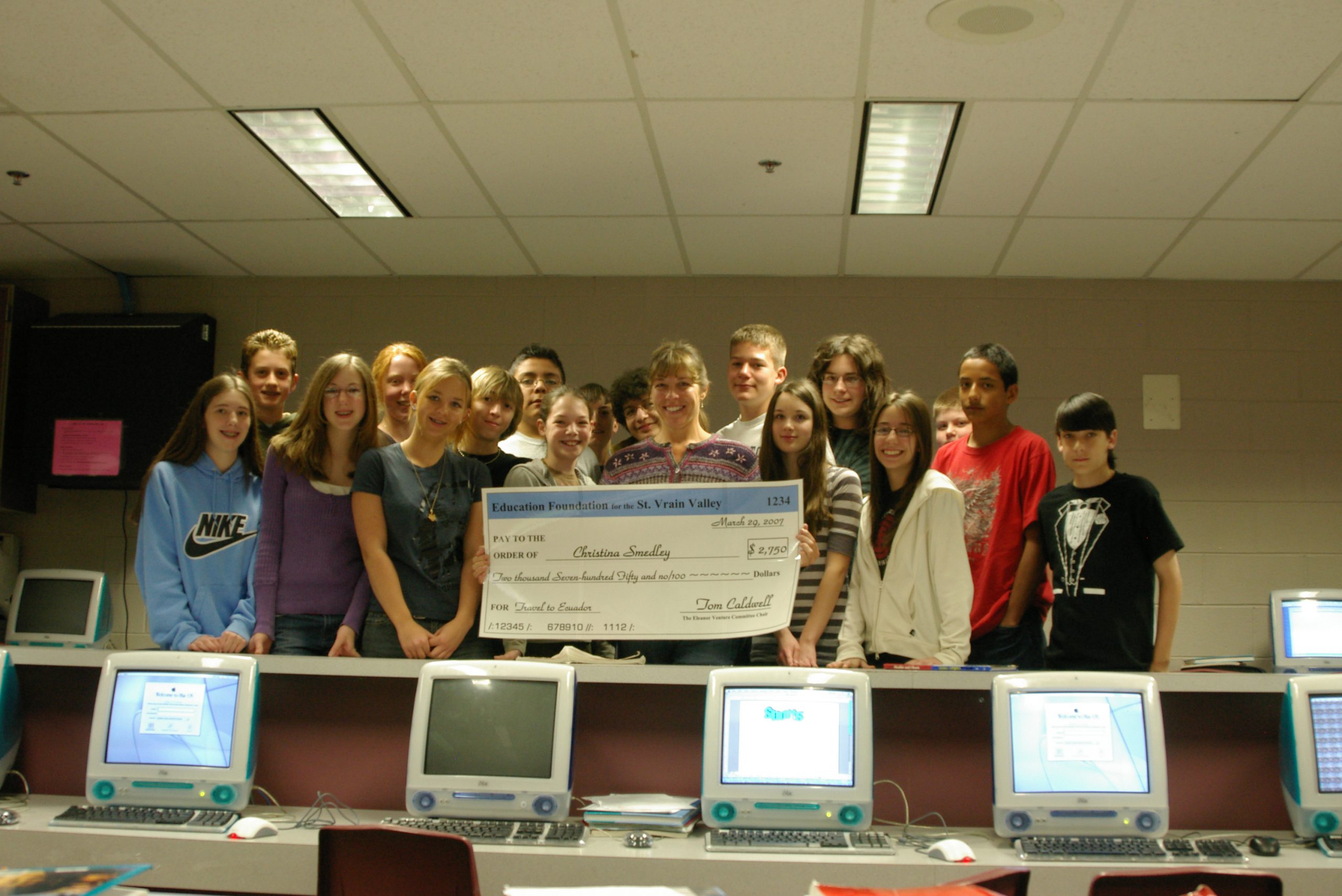 On June 18, 2007, I departed for DIA for the adventure of my dreams. As I embarked on this long awaited journey, my heart pounded with anticipation and my mind raced with so many questions.

Each stop was an adventure, even my layover in Houston Texas. I wanted to ask each and every traveler about their journey. So many people, so many stories.

The next morning I awoke to the buzz of foreign travelers. People were making plans, talking on the computer, and eating a delightful breakfast on the rooftop overlooking downtown Quito. This would be home base for me as I would return two more times during my adventures in the Andes.

The first day was eventful. After several attempts to find El Banco Central Museum, I hailed a cab, which I found to be quite easy and cheap. I spent four hours touring the archeological museum. I focused on the pre-Hispanic era including the Pre-Inca and Incan Societies. I also enjoyed the progression of art from the early indigenous years to modern times. I was fascinated how influential the Spaniards were using their Christianity through art.

I continued my tour through the new part of the city. The second day, I toured the old section of the capital city. I went to the Mercado, and took vibrant pictures of the fruit, flowers and beautiful people of Ecuador. My favorite stop was a modest store that sold nothing but bananas. During my excursion of the old town, I found tremendous belief in faith, strong family and marital values, and a sturdy work ethic (even during a sluggish economy). The Ecuadorian government adopted the American dollar in 2000 to stabilize the economy. I am not sure that all vendors would agree.

My evenings were spent eating at the hostel with guests from all over the world. Each guest had a purpose, either volunteer work, leaning Spanish, going to school, or for the privilege of traveling. The roof top restaurant and bar was a popular place, especially if you used the wool ponchos provided on the hooks behind the tables. There was extreme pleasure with the company, fine food, and the local pilsner. 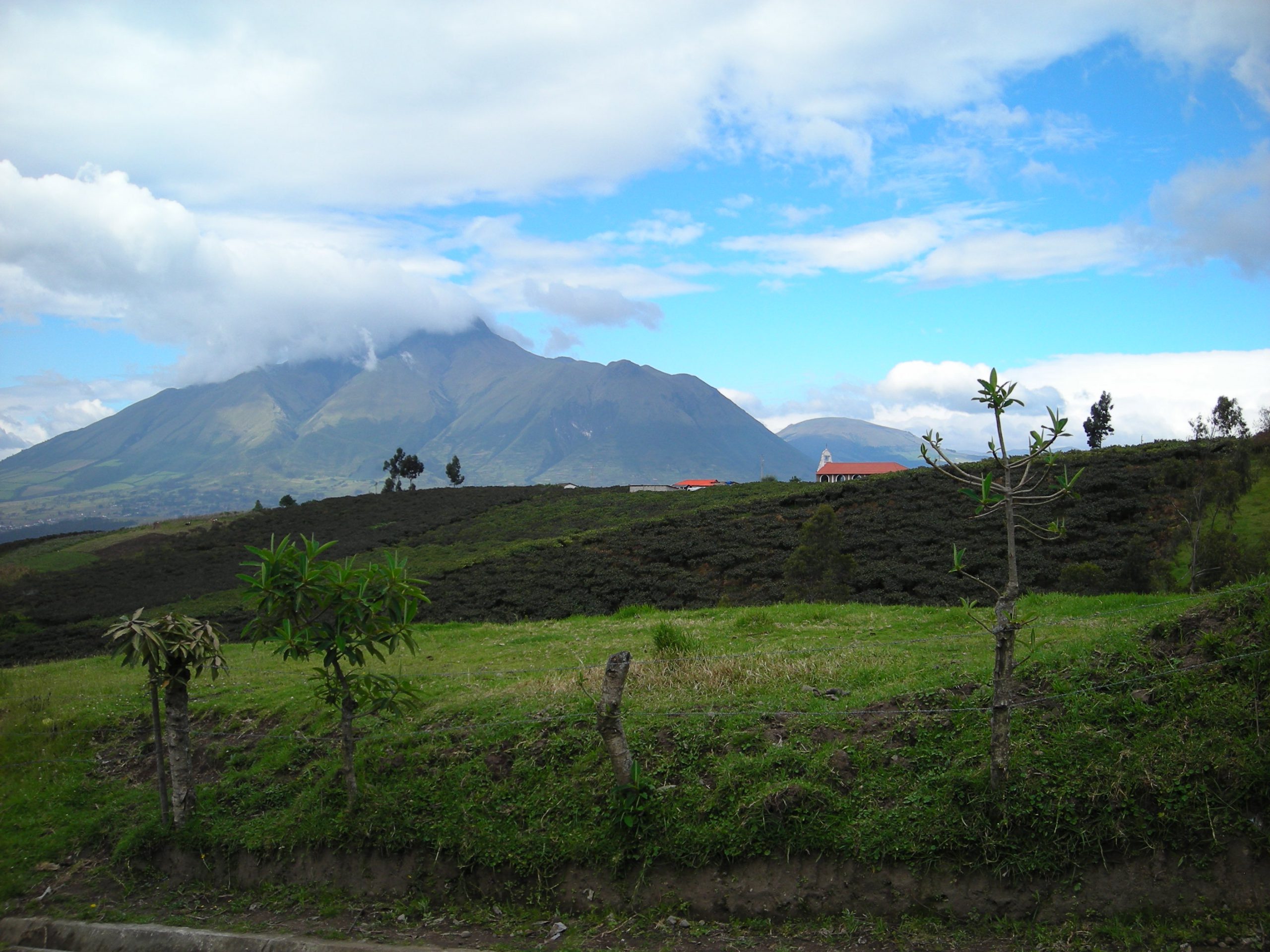 The next day, I left for the bus station, and caught a bus to the famous high-altitude city, Otavalo, known for its colorful Saturday market. After my not so safe trip to Otavalo, I caught a cab up to Casa Mojanda. I thought I had stumbled on to the grounds of heaven. This hacienda sat peacefully in the Andes surrounded by volcanoes. Each moment was a treasure in time.

My first journey from the hacienda was down a cobblestone path. I turned and walked up a hill that had a sign that pointed to a school. My short visit with these elementary kids was priceless. These students were in an after school program that was run by a college student from town. These children were eager to try their English, and wanted to touch my arm, it was so gratifying. These students did not wear uniforms, which indicated to me that they were from a poor village, because most children wear uniforms to go to school.

The next few days of my journey were packed with historical tours and eventful shopping in villages around Otavalo. We went directly to the artesian, watched their craft, and heard stories about their ancestors and the history of their crafts. The next day was the “Summer Solstice.” This festive day is very important to the Otavalenos. We started the morning at an animal market, followed by the famous Saturday market. This was a complete overload of all five senses. I felt so alive and full of electricity as we bounced from vender to vender.

I left the next morning around 3:00. We crossed the equator around 4:00 in the morning. Not many people can say that they spent part of their birthday in the northern hemisphere and the other half in the Southern Hemisphere. I felt so blessed.

Later that day, I caught a flight to the colonial capital of Ecuador. Cuenca was just another highlight on my two-week trip. Again, I found another hostel tucked in the old part of Cuenca. The city was smaller than Quito, but only a bit warmer. Wool blankets were necessary. That evening I spent my birthday at an upscale ice cream parlor in the Plaza Mayor. Sundays are very important family days. I had fun watching all the different families visit, dine, and stroll around the Zocalo.

The next day, I walked all around the colonial city, stopping at the Museo de las Aborigenes. I particularly enjoyed the history and artifacts of the indigenous cultures that inhabited Ecuador prior to the Incas. I also found that the current Cañar Indians displayed a much different dress than the Otavalenos and other indigenous groups in Northern Ecuador. The Cañar Indians lived in the area around Cuenca. My stay in Cuenca was fabulous, although I highly anticipated my trip to the Galapagos Islands. 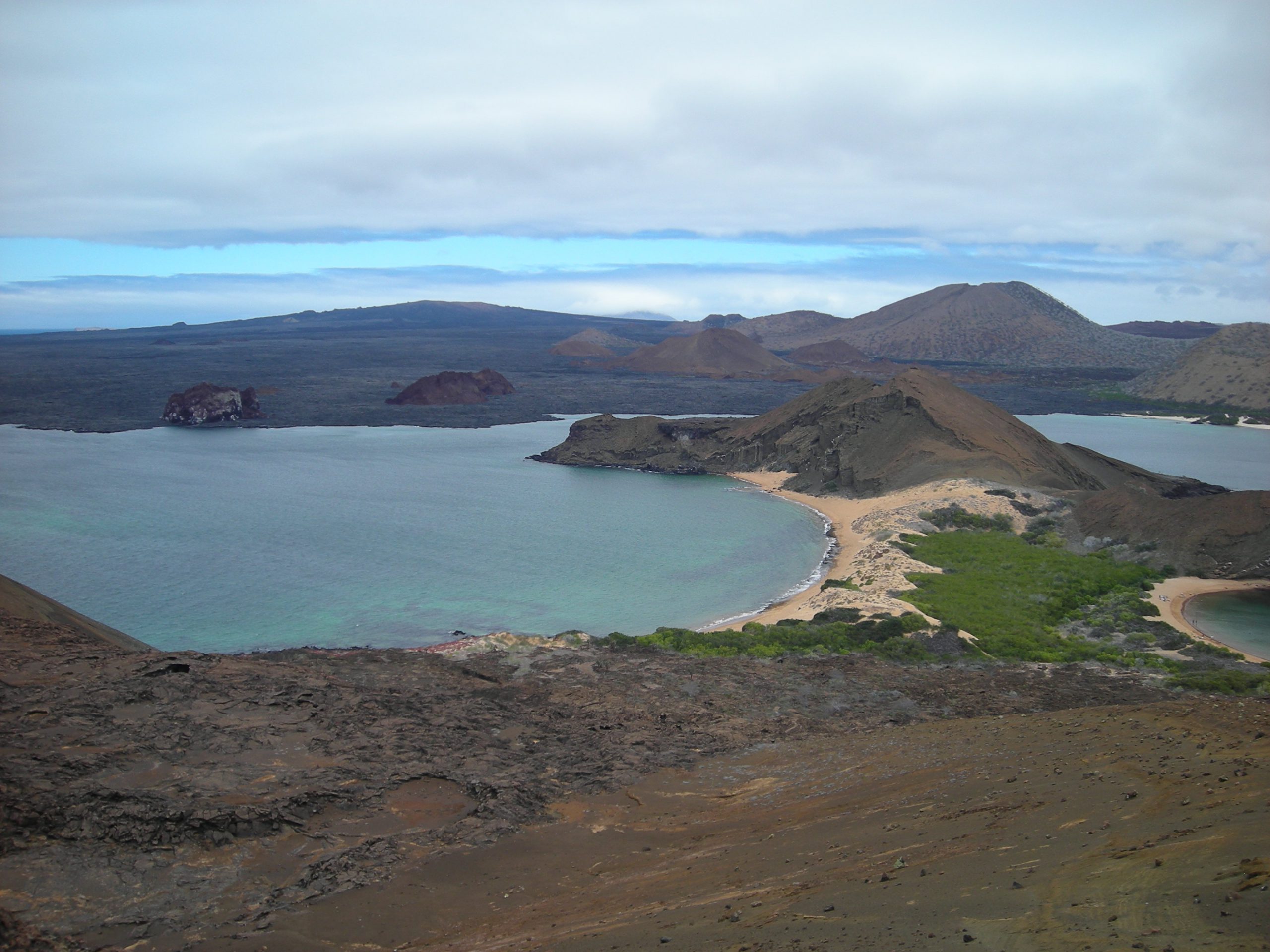 The next day I departed for the industrial city of Guayaquil. I left the frigid highlands for the humid coast. I was finally warm. I finally traded in my wool sweater for my shorts. I stayed in downtown Guayaquil near the river walk. This heavily gated walkway was a safe a beautiful stroll along the river that leads to the ocean.

My next mission started the next day as I headed to the Galapagos Islands about 600 miles off the coast of Ecuador. When we landed on the Island of Baltra, I was very confused. It looked like a desert in the middle of the ocean. The climate was very dry and the cactus replaced the palm trees that filled my mind. These last few days of my journey were unforgettable. My first day on my exploration on the volcanic islands was on Isla Santa Cruz. We first stopped with an overlook at the Gemelos. These twin volcanoes were deep in the ground surrounded by a cloud forest. After a quick introduction to the island, we took a hike and stumbled upon gigantic tortoises. These 100-year-old creatures had no fear of humans as they made their way to a green swamp. I marveled at the size and speed o these reptiles. As the day ended, we toured some lava tunnels and journeyed to our hotel. After a cab ride, airplane, bus, ferry, another bus and a panga, we finally made it to our hotel.

I quickly changed and headed to the beach for a kayak ride around the hotel. I finally set eyes on a marine iguana, some sea turtles, manta rays, sally light footed crabs, and sea lions. These reptiles and mammals are found nowhere else in the world. These endemic species have “evolved” as Charles Darwin said, as he reported after spending several weeks on the islands in the early 1800’s. None-the-less, the animals were truly a unique experience.

The next days were filled with boat rides to different islands. We got up front and personal with sea lions, crabs, blue footed boobies, frigate birds, and different types of iguanas. All of these species coexisting in harmony on specific islands on the equator. Each day was an extraordinary gift from the grant, especially my tour of the Galapagos Islands. I am not a boat person, but I was able to find sea legs (thanks to the Kaiser Travel Clinic). Therefore, I was able to travel around to different islands, all very different from each other, loaded with specific endemic species.

The highlight of the Galapagos Islands was my last day on Turtle Beach. The long walk out to this secluded beach was well worth the visit. The white sand, warm turquoise water, and the Darwin Finches that joined us for lunch, was a dream. I did choose not to kayak with the sharks in the bay, I preferred to walk along the beach and marvel at the marine iguanas that blended into the lava rocks. My Galapagos tour came to a quick end, but left me with a lifetime of memories to share with all of my students. 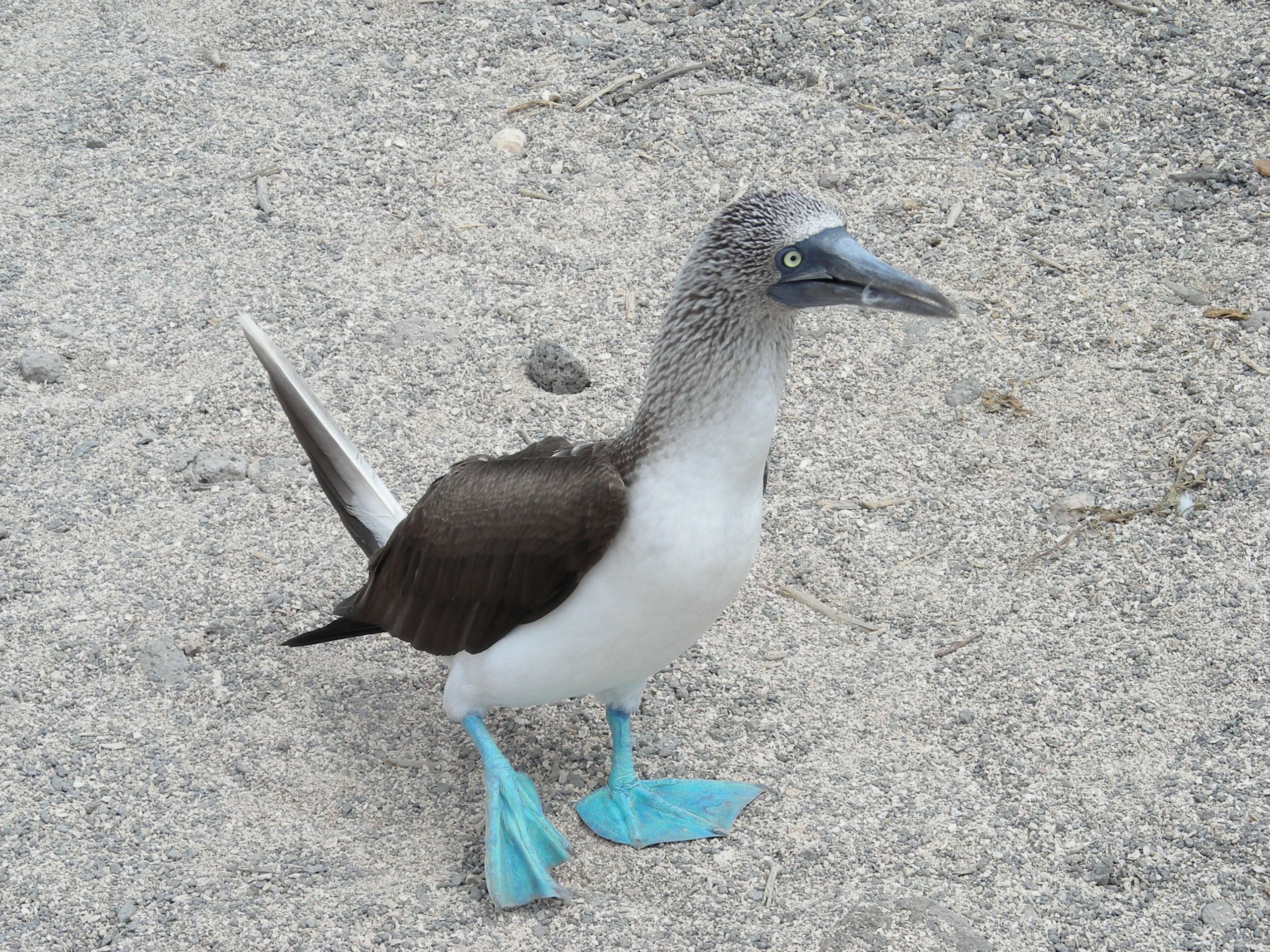 My last day of my adventure was spent in Quito. A friend took me on a tour behind the scenes in the capital city. We went behind the closed doors of El Banco Central, where my friend was a museum curator. We also toured El Mitad, the middle of the world (the equator).

I spent my last night at the Secret Garden. My trip had finally come full circle, and ended right where it had begun June 18, 2007. My suitcases were full of artifacts, weavings, textiles, and music from the Andes. I was finally heading for Longmont to create my traveling trunks to share with my students for the years to come. I can remember each day of my journey as if it were yesterday. I cannot thank the Eleanor Venture Travel Grant Committee enough for my travel grant to South America. This opportunity was a gift of a lifetime.