The 2013 Eleanor Venture Grant Recipient was Brigitte Toucheque. Brigitte was the Counselor at Coal Ridge Middle School. She traveled to Ecuador during June 2013 to participate in a Spanish Language Immersion Program.

On March 21st of 2013, I was graciously awarded the Eleanor Venture Travel Grant through the Education Foundation for the St. Vrain Valley. This generous grant, along with the warm support of the members of this committee and my fellow colleagues, friends and family, allowed me the unique and incredible opportunity to exper 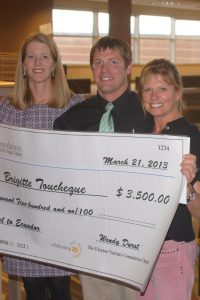 ience a Spanish Language Immersion Program in Quito, Ecuador. This past June I was able to travel and study Spanish for three weeks in various parts of this amazing country. I arrived back to the United States a changed professional and an enriched human being.

Prior to my journey to Ecuador, I completed Spanish I and II during the school year at Front Range Community College in Longmont. In addition, I completed a one-on-one Conversational Spanish c
ourse 2 months before the date of my departure in June. Although I am still a far cry from being a fluent speaker of the Spanish language, my 3- week immersion experience has inspired me to continue my studies in Spanish and has broadened my knowledge and appreciation of our Spanish-speaking community’s culture in significant ways.

The first two weeks of my time in Quito consisted of a daily routine which included Spanish Class that began promptly at 8:30 a.m. The classrooms were very small so there were never more than four of us with one teacher. As a matter of fact, during the second week of classes, I was with just one other student so the ratio was two to one. I found that class-size in a language class makes a huge difference in the quality and speed with which material is covered. And since the philosophy of this school is to ONLY speak Spanish when in attendance, it also provided constant and intense speaking and listening experiences four hours a day.

The school, “Academia Latinoamericana de Español” was simple and beautiful. It was surrounded by a very tall gate and a guard who unlocked the door for us as we came and went. The guard was there 24/7. The school had 4 floors and about 18 small classrooms. The top floor was for the faculty but we occasionally went there to team up with another class for group activities — fun games that helped to reinforce the lessons we had that day. Classes ended at one o’clock every day and then we were given an hour lunch. We reconvened at two o’clock to begin our afternoon activity. Again, the ratio was two students to one teacher with the expectation that we only speak Spanish for the entire excursion.

Every daily activity proved to be eye-opening and a real life-lesson of the surrounding culture. The public bus rides to and from our excursions were rich experiences in and of themselves. The drivers were very aggressive in Ecuador and there were no limits on how many people could ride on one bus at the same time. Young ladies have to be very cautious and, even when they are, they still often experience uncomfortable close proximity to men that have no personal boundaries. In addition, one has to be very smart (especially when obviously a tourist) to watch for theft on these public buses. The taxi experience was void of the challenges that mingling with the public brings, but is not an experience for those who are faint of heart. These drivers are especially aggressive and I found myself fearing for my life a few times!

The excursions planned for us were beautiful, phenomenal and rich with historic tales. In the first week our activities included: a tour of the city of Quito via public transportation, including an orientation of the public bus system; “El Centro del Mundo”, the center of the world; “Mercado Artesanal la Mariscal”, a typical market place in Ecuador; “Basilica del Voto Nacional”, a beautiful 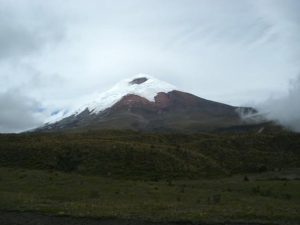 famous cathedral where I climbed to the top to experience the view from the steeples; “La Casa de Oswaldo Guayasamin”, the home of a famous Ecuadorian artist; and “Cotopaxi”, a very steep and ashy volcano. I was thrilled I made the climb up to the glacier line!

The highlight of the first week for me was the center of the world, “El Centro del Mundo”. There I was introduced to unique experiences of the amazing force of gravity between the northern and southern hemispheres. Experiments were conducted in which we were invited to participate. A few of them included balancing an egg on a the head of a nail, pouring water into a basin and watching it swirl to the center in one direction when in the northern atmosphere and the opposite direction when in the southern atmosphere, and walking on a chalked line on the ground with eyes closed, feeling the strong pull to the right and left sides of the body. The area was beautiful with amazing foliage and there were village folk weaving handbags and wallets and an elderly gentleman playing a homemade flute.

During the second week, the afternoon and weekend activities included: a trip to a typical fruit market that had an enormous variety of fruit unique to the country of Ecuador; the Children’s Project which was a most touching and inspiring experience with the poverty-stricken children of Quito; a visit to Pichincho Volcano in which we arrived via taxi and gondola; a Reptile Museum, preparing us for the creatures we could see in the Amazon River region; the City of Roses, a most remarkable farm of one of the largest manufacturers of every color of rose in the world; “Desposito Otavalo”, one of the largest and busiest markets in Ecuador (especially on the weekends); and Papallacta Hot Springs, a gorgeous, tropical city where 3 glorious hot spring pools exist for the relaxation of all who visit.

Finally, the last week of my three-week immersion program in Ecuador was a 4-day, 3-night stay in a grass-hut village called Cotococha Village located just outside the city of Tena in the Amazon River region. There we were introduced to the tropical part of Ecuador, where huge trees, vegetation, flowers, animals and insects abound! My 3-day stay was packed with visits. The first was a canoe trip down the Napa River to Misahualli, “monkey city”. The city was dominated by curious, little monkeys! They swung from restaurant signs, walked the little parks and greeted us with screeching glees of excitement. From Misahualli, again via canoe, we visited a natural, outdoor zoo of the indigenous animals of the Amazon River region. We then travelled to a nearby Quichuan village (a native tribe of Ecuador) to experience how they use the life of the rain forest for daily living.

On the second day in Cotococha, we made a very challenging, slippery climb up to a waterfall in the rain forest. There I courageously (or naively!) jumped into the pool of the waterfall. Rather than climbing back onto the canoe, I tubed down the Napa River back to our village. Later that day, we paid a visit to the city of Tena. The third day we embarked on the long bus ride back from this enchanting rain forest to prepare for our journey back to the United States.

As a result of this incredible trip to Ecuador, my Spanish much improved and the desire to continue mastering it to fluency inspired. I found it difficult transitioning back to the United States in that the cultures are so very different. I discovered I left a part of my heart behind with the people, the beauty, the harsh living and overall culture of the country of Ecuador. 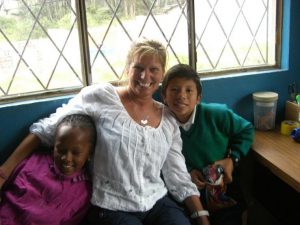 My hope and intention is to return to South America to engage in more exploration of the various countries and its people. My inspired goal is to return even more fluent in the Spanish language and perhaps serve the region through missionary work in the area of education.

I want to thank the Education Foundation for the St. Vrain Valley for choosing me as proud recipient of the Eleanor Venture Travel Grant and providing me with the educational experience of a life-time. I will move forward with this experience in continuing my service to others, utilizing the Spanish language.

Thank you for opening my world in such a profound way!